June 10, 2022 By Ethan Hedman in Uncategorized Leave a comment

Like so many other writers, I love cats. They’re charming, independent miscreants, staking their territorial claims anywhere from the comfortable homes of their so-called owners to hard-won feral segments of the rough-and-tumble streets. So, when a call for submissions came along requesting speculative stories featuring cats in a variety of future settings, I knew I had to submit, and was delighted when my story got accepted.

Introducing Felis Futura: An Anthology of Future Cats, CB Droege’s latest Manawaker Studio anthology! It’s a cozy kitten pile of stories, poems, and art from 40 cat-enamored contributors. My story, Auto Motive, is a short near future tale of an encounter between the AI inside a self-driving moving truck and an unexpected, curious guest inside its typically empty cabin. If a book filled with the future of nature’s adorable scoundrels is up your stray-cat-laden alley, you can snag a copy for yourself right now on Amazon.

April 21, 2022 By Ethan Hedman in Uncategorized Leave a comment

It’s been a while since I’ve had anything to announce around here, so I’m especially delighted to say that Grandpa’s Deep-Space Diner, Jessica Augustsson’s latest speculative fiction anthology, is out and ready to be devoured! The book is filled to the brim with short food-related stories, containing a whopping full-course menu of 58 different tales.

My contribution, Pancake Peculiarities, is a near future sci-fi piece about a pair of made-to-order AI-driven pancake machines which end up getting unexpectedly creative with the boundaries of their programming. This’ll be the third JayHenge anthology to include my work, and they’re always a blast to read; I can’t wait to dive in and see what everybody else cooked up. You can pull up a chair and dig in, too, by nabbing a copy on Amazon.

I’ve signed a few other contracts lately, as well, so more announcements should be coming before too long. If you’re curious, you can sneak a peek at the titles and genres of those forthcoming works in my bibliography. Until then, bon appétit!

March 17, 2021 By Ethan Hedman in Uncategorized Leave a comment 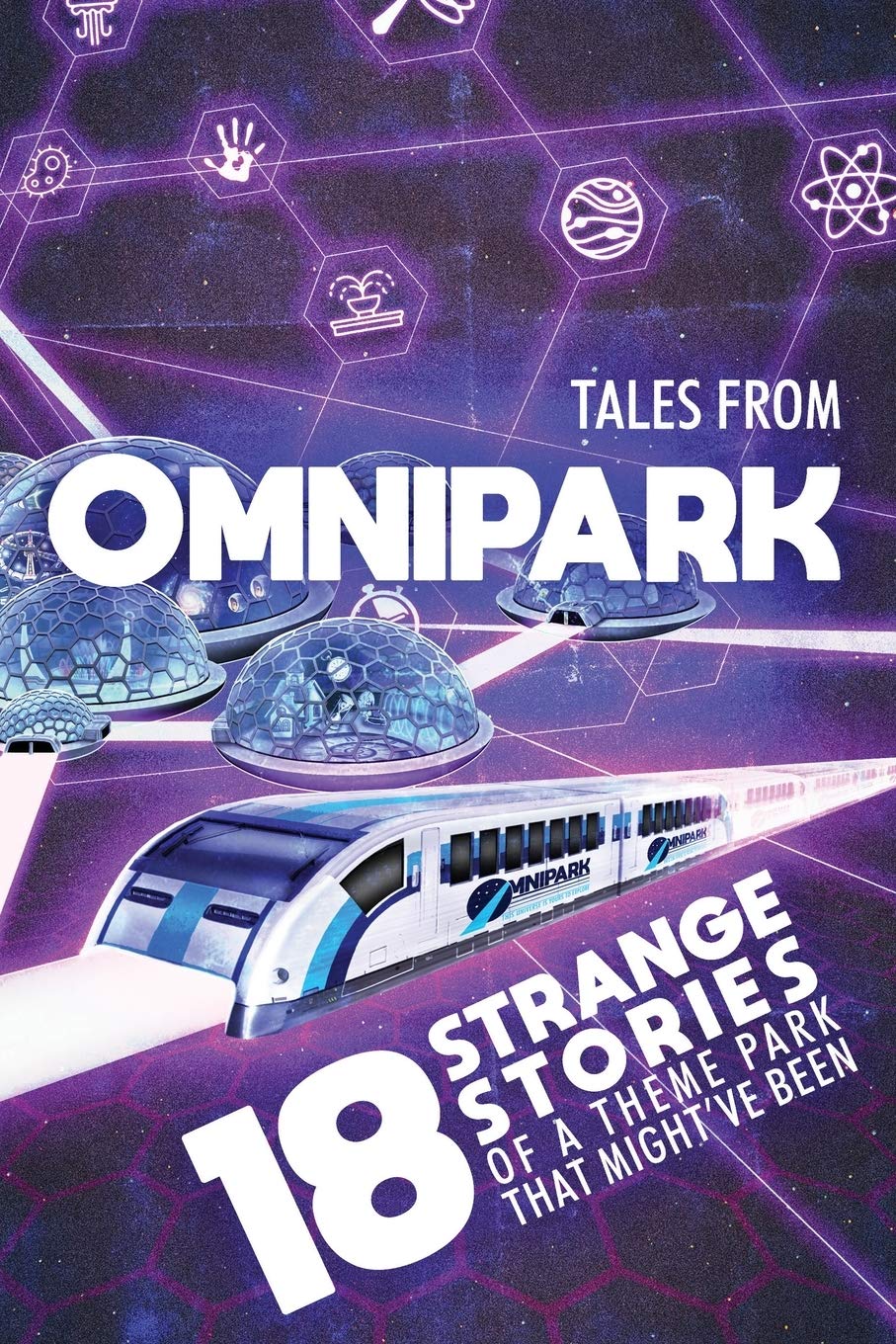 After two Kickstarter campaigns and months of anticipation, Tales From OmniPark has finally been released! It’s the latest short fiction anthology from House Blackwood, and its folds contain 18 strange, wondrous stories from the titular theme park that might’ve been.

The original submissions call for the anthology was accompanied by a link to OmniPark Memories, a wiki which describes the various features and attractions of the mythical park in vivid detail. As a lifelong sci-fi fan I was drawn to the Realm of the Stars, and wrote That Which Skulks Among the Stars, a short sci-fi story with some cosmic vibes set within and behind the walls of OmniPark’s mock space station.

Tales From OmniPark is available in paperback on Amazon (which, for some reason, thinks it was published in January, despite its actual March release). You can snag a copy for yourself right here.

December 28, 2020 By Ethan Hedman in Uncategorized Leave a comment

I think we’re all ready to slam the door on 2020, an exhausting experience of a year which consistently dredged up exciting new ways to make us collectively say “oh, for fuck’s sake.” I actually managed to get a lot of writing done, but did a pretty terrible job keeping my website updated; posting anything on here always slipped between the cracks of time spent staying sane by binge-rewatching 90’s Star Trek series, gaming online with friends I’d get together with on Saturdays before the pandemic, and, eventually, looking forward to the weekly spacefaring adventures of The Mandalorian. Since the year’s finally coming to a close, I thought I should finally mention the handful of publications I’ve had in 2020’s second half which never really got a proper shout-out.

In July, I had a short story published within the digital folds of The J.J. Outré Review, an online quarterly journal featuring all sorts of genre fiction. My contribution was a sci-fi piece titled Likeness, a story about an ordinary guy getting a lot more than he bargained for after signing over the use of his likeness in the possible near future of the post-deepfake acting industry. You can read it for yourself ! (UPDATE: The J.J. Outré Review has since vanished from the internet without any hint of what happened to it or communication with the writers who were slated to be published in their upcoming issues.)

Then, in August, I had a pair of drabbles published in Ancients, a dark microfiction anthology published by Black Hare Press. The first, Freedom, is about a gladiator fighting to free himself, and the second, Monumental Mourning, involves the sudden awakening of a certain ancient monument. If tiny tales of ancient myths and civilizations are up your alley, you can snag a copy of Ancients on Amazon.

October offered up a fantastic surprise; I was able to find a perfect home for something I never actually thought would get published, haha. I’d written a poem about a particular moment in piratical history, a day from 1717 which will hopefully be remembered as the charming, odd pinnacle of Benjamin Hornigold’s infamous career. The poem, An Uncommon Bounty, was one of the first pieces published by Sundial Magazine, a new online magazine of historical fiction. You can read the poem here!

Finally, earlier this month, I had a short story published in Sunshine Superhighway, a collection of optimistic sci-fi stories put together by the fine folks at JayHenge Publishing! They previously published my civicspunk story Like Clockwork in their Unrealpolitik anthology, which was also edited by Jessica Augustsson. This time around, my story’s called The Best Thing Since, a sci-fi piece about the simple pleasure of sharing a familiar meal. I’m really glad to end this long year with an upbeat anthology; if you want to dive into some optimistic fiction yourself, the book’s readily available on Amazon. 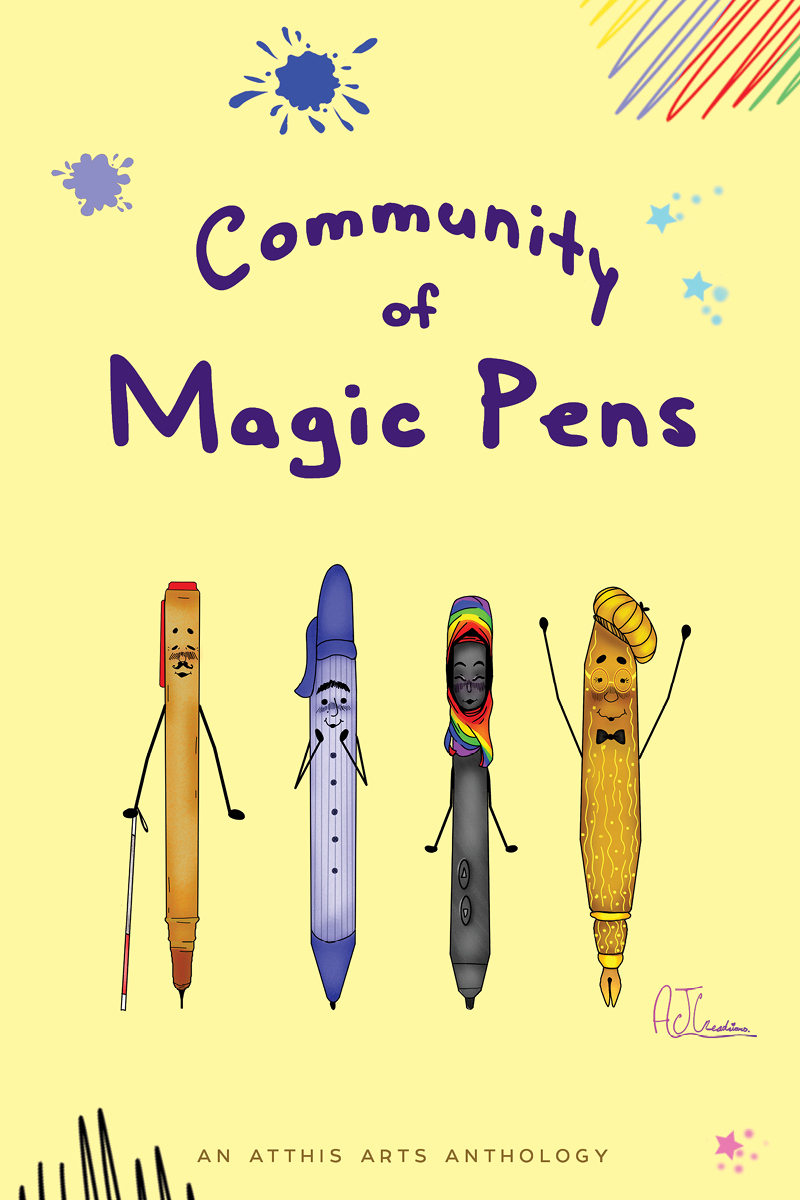 We’re living in pretty strange times with the shadow of COVID-19 looming over everyday life. As stressful as everything has been lately, with stay-at-home orders and timeline uncertainty, it seems like a great time to revel in fiction. So I’m especially happy to announce the release of Community of Magic Pens, Atthis Arts’ latest short fiction anthology!

Community of Magic Pens is filled with 40 stories which span a bunch of different genres, from fantasy and science fiction to alternate history and magical realism, all focused on the central theme of magical pens. My own little contribution to the collection is a short sci-fi piece about a lone terraformer bringing new life to a barren moon with her trusty stylus. If you think it might be up your alley, you can snag a copy for yourself from Atthis Arts or on Amazon.

Gunsmoke & Dragonfire is finally out! It’s a hearty anthology of 25 fantasy Western stories which dabbles around in some other speculative genres, like science fiction, post-apocalyptic, and cattlepunk, too. This book’s a really special release for me, since my little tale is both the very first one in the collection and the story behind the cover art.

My tale, Inheritance, is of an encounter between a wandering gunslinger and a shopkeeping enchanter, briefly brought together by their late fathers’ past dealings. I wrote it after getting super inspired by the anthology’s title during its call for submissions, and was thrilled when Diane Morrison, Gunsmoke & Dragonfire’s wonderful editor, chose to include it in the book. You can snag a copy right now on Amazon or directly from Diane via Aradia Publishing!

November 30, 2018 By Ethan Hedman in Uncategorized Leave a comment

JayHenge Publishing’s latest anthology, Unrealpolitik, has officially been released! I’ve been awaiting its debut for months after having my first deeply political story, Like Clockwork, accepted for the book. The tale mashes extremist politics and gladiatorial combat together in a fast and furious civicspunk romp.

Like Clockwork means a lot to me. It was an avenue for venting frustration with the ongoing Trumpian dumpster fire (and the terrible system which spawned it) when I first wrote it more than a year ago. It was something I really needed to write, and it feels great to finally have it out in the open in the midst of all of the current political craziness.

Unrealpolitik is stuffed with 37 stories, exploring all sorts of political themes through the lens of speculative fiction. If you want to escape the real world’s flurry of headlines for a while, hop on over to Amazon and grab yourself a copy.

I’ve got another bit of flash fiction out! It’s called Under Her Wing, a little contemporary fantasy tale about an adopted dragon and an abandoned drone. The piece was inspired by an awesome Chris Howard illustration for the October 2018 issue of With Painted Words, an online magazine featuring prose and poetry prompted by different images every month. Check out the story here!

July 13, 2018 By Ethan Hedman in Uncategorized Leave a comment

Fans of extreme brevity, rejoice! Drabbledark is nearly out. It’s an anthology of drabbles, stories told in exactly 100 words. There’s 101 stories from 86 writers with a bunch of variety; my little contribution is post-apocalyptic, but the themes of the pieces run the gamut from monsters and murders to stalkers and summonings. The sole common denominator is, as the title suggests, that the stories within are all quite dark.

Usually I wait until an official publication date to mention anything which includes my work, but Drabbledark’s a bit of a special case. Technically the book releases on the 20th, but the paperback version was made available slightly early to account for shipping times. You can find both with a quick hop over to Amazon.

Tales of Ruma is finally out! It’s a great collection of 17 short stories inspired by the myths and legends of ancient Rome, Greece, and Ruma, an original RPG setting created by the editor, Martin Greening. These stories come in all sorts of flavors; you’ll find tales of the gods, telepathic unicorns, giant elemental creatures, and gritty, bloody battles between mere mortals. I’m super honored to have been included as something of a new kid on the block alongside a bunch of really spectacular writers.

My story’s a brief battle scene titled From the Pan to the Flames. I wrote it specifically for Martin’s Ruma setting in the hopes of contributing to his fledgling world and was thrilled when he accepted it into the anthology. It was a magical experience to see and hold my work in print for the first time. My short story The Collection, appearing in Lucent Dreaming, was published first, but my copy of their debut issue took a bit of time to make the long journey across the pond.

The book is available in both paperback and Kindle editions on Amazon. You can also take a sneak peak at the first story in the book, The Question that Matters by Jody Lynn Nye, thanks to Amazon’s nifty Look Inside feature. If you want to get even more of an idea of what the anthology has to offer, Jonathan Ficke, another contributor, wrote up a great rundown of all of the stories over on his website.

Hi! I’m Ethan Hedman. Welcome to my little corner of the internet. I conjure ideas, write words, and share stories. Click here to check out my work!